Near Lake Patzcuaro in Michoacán, indigenous women embroider colorful pictures that can be framed or made into decorative pillows and clothing. The themes of these embroidered “stories” originally came from ancient mythology of the Tarascan or Purepecha Indians, drawn from seals found in Tzintzuntzan. Gradually many women  there began depicting traditional village dances such as the Dance of the Viejitos and festivals such as Dia de los Muertos. The artisans also embroider scenes of women cooking, men fishing, and other scenes of daily life in a Purepecha village. 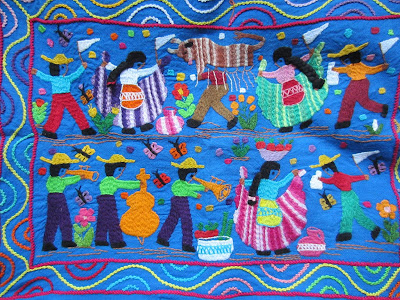 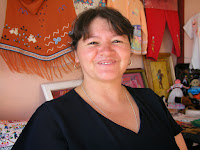 Teofila Servin Barriga is one of the most well-known of the Santa Cruz embroiderers.
She lives and works with her husband, Julio, in Sanabria-- on the road between Patzcuaro and Quiroga-- with stunning views from her home and garden of green pastures, corn fields and Lake Patzcuaro that inspire her art. The first time I saw her embroidery was almost 20 years ago, when Doug and I were on vacation, our first time in Michoacán. Julio and one of their sons were working at a table they'd set up on a Patzcuaro sidewalk. Julio was drawing as well as teaching the boy how to create the scenes that Teo would later embroider. We chatted with them for quite a while, and I must have asked at least five times for the price of a small embroidered piece on the table that had caught my eye. Julio was so engrossed in giving us the history and stories of the area and culture represented by the pieces, that he seemed to be completely disinterested in selling them to us. Finally I was able to buy it, and as we said goodbye, he told us that we could find Teo on the road to Tzintzuntzan. But it was many years later when were living in Michoacan, we found ourselves on that road, that I put two and two together and realized that the handmade sign that read "Artesanias de Teo" might very well be the same family. We stopped the car and found Teo working in her little shop. Julio later walked up from the nearby fields he was tending, and we knew that this was indeed the place. Their young son had grown up and was attending university, and Teo had begun to make a name for herself.

Teofila has sold her pieces to collectors in Mexico, Europe, the United States, and Japan. Before being selected to participate in the Santa Fe International Folk Art Market with Mexico By Hand, she was invited to represent the embroiderers of Michoacan at a special exhibition in Milwaukee, Wisconsin and to participate in the Great Masters of Mexican Folk Art exhibit in 2004.
In 2011 Teofila was featured in the video, En las Manos de las Mujeres, a video produced by Mexico By Hand about four master craftswomen of Michoacán. Two other talented embroiderers of the same style we've come to know are Roselia Barriga (above) and Cristina Barriga-- of Artesanias Textiles deSanta Cruz. If you get to visit Patzcuaro, their work can be found at the Casa de los Once Patios.

Mexico By Hand sells a selection of embroidered pictures, pillow covers, and beautiful cotton blouses here on our website in our TEXTILE COLLECTION. 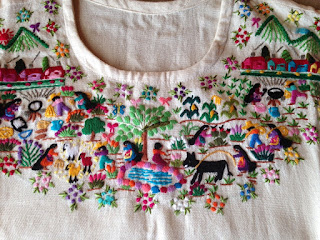